I just read on the news that Chris Moyles had a bit of a rant on his radio show yesterday morning about not having been paid for two months. He was back on air this morning, standing by what he’d said the previous day, and defending himself with the statement that he’s “not a morning person”.

One could questions why a non-morning person is hosting a radio show that kicks off at 6:30am, but back to the topic in hand. Why has he not been paid?

He’s employed by the BBC which takes over Â£150 a year of most households’ money in license fees, a slice of which goes to the radio stations. A portion of this should be making its way into Chris Moyles’ bank account on a monthly basis. For some reason this hasn’t happened.

Is it an administrative cockup? A form not being filled? A banking error?

And I don’t care. Those outside of the UK likely haven’t heard of the people involved in the current BBC scandal doing the rounds. Russell Brand (who I only heard of this week, but I’ve been out of the country for some time) and Jonathan Ross (a somewhat whacky DJ/TV personality) left telephone messages for Andrew Sachs (who played Manuel in Fawlty Towers many years ago) claiming that Brand had shagged Sach’s grand-daughter Georgina Baillie. Who herself plays a goth vampire in a travelling burlesque show called the Satanic Sluts (look for her there under “Voluptua“).

Are you still with me?

Thing is, it was a joke. Sachs has come out and said that the apologies offered by the Beeb, Brand and Ross are all nice and he sounds like someone who’s pissed off but would rather get over it. His publicist is more angry by all accounts. And Baillie / Voluptua has cancelled some shows in embarrassment. Quite how someone who’s life revolves around wearing hot clothes with her boobs hanging out, pretending to cut other women’s throats in faux-lesbian photos and stage shows can claim to be embarrassed by anything is beyond me, but what the hey.

Sachs has pretty much retired, and his grand-daughter is going to be rolling in publicity through this. She’s been trying to get a career as an actress, and what any film studio wants is a “name”. It’s hard to make someone famous – she’s just had a shitload of free publicity. And she’s hot as ****.

The Guardian are calling for their heads (surprise), while the Sun’s published photos of Voluptua with her tits out. Nice to see how our media works. And a shame I can’t find those pics online.

What’s teeing me off is the number of people baying for the two DJ’s heads and asking them to be removed from radio for evermore. Hang on, if they were listening then surely they know the kind of stuff these two guys get up to. It’s often near the knuckly and Ross is known for being pretty sexually forward – or at least dropping more double entendres than a 6-year backlog of Finbarr Saunders cartoons.

If you don’t like them… don’t ******* listen. It’s as simple as that. Frankly I think Ross has/had (like I said, been out of the country for a bit) one of the few watchable chat shows on TV and he was the highlight of BBC2’s They Think It’s All Over. He’s genuinely funny. Brand… dunno. He’s some bloke that’s become famous since I left.

If we have to start banning people from the radio, can we please ban Chris Moyles instead? He doesn’t offend me. He’s just incredibly ******* ****.

And to save you googling, here’s some links to pics of the hot chick involved…

I’m also peeved as I just noticed they’ll be “supporting” Wednesday 13 at his Hallowe’en show in London. Which I really wanted to go to but I can’t as I’m flying to Geneva on the Sunday. Feck!

Humphrey Lyttelton died earlier this week. For those too young (i.e. who don’t listen to “old people’s radio”) or too non-British to know who he was, he’s most famous for presenting a Radio 4 show called I’m Sorry I Haven’t A Clue. It’s one of those quiz shows with celebs in it, and some daft questions. Along the lines of TV’s Have I Got News For You, Never Mind The Buzzcocks, and – to some extent – Who’s Line Is It Anyway?

It was/is (I don’t know when it’ll pick up again) a remarkably funny show if you get a chance to listen to it. The link above is to the official page with lots of samples to download and enjoy. I confess I didn’t listen to it regularly, but if it happened to be on when I was in the car it was a great half-hour chuckle. And you’ve not lived (or stretched your imagination) until you’ve played a strenuous game of Mornington Crescent against an expert.

Lyttelton was most famous for his constant use of double-entendres. I had a “complaint” in my comments the other day that I use naughty words on here and therefore I have no appreciation of the English language or the wondrous variety of nuances within it. Let alone how to be smutty without appearing to be so.

This article on the BBC News site is a great summation of the show and Lyttelton himself. Definitely worth a read. 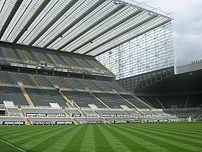 I’m in the process of downloading Match of the Day from a torrent site (well, if the BBC won’t let me watch something I’ve paid for via their online system, I’ve got to resort to something). I’ve just noticed the running order and – like back in the old days – the Newcastle United game’s tagged on at the end.

Now, I don’t know if we were any good or not, but I do know that we managed to come from 2-0 down to get a draw. So all the excitement may have come in the first half, but at least there was some. By all accounts the Wigan – Reading draw was incredibly dull with only one shot anywhere near goal in the 90 minutes. Yet it’s two games ahead of ours in the coverage.

There were some good games yesterday, so how come the boring 0-0 draw has a higher billing? Or is it the old anti-Newcastle thing again? Or is it just perceived on my part as I’m biased?

OK, this news came as a bit of a shock. So I wrote them a letter. And got a (pointless) reply.

I don’t get this – you’re removing the Cult website as it’s “too similar to the commercial sector” i.e. there are other websites with similar content. Perhaps… but none of them are as good, nor as comprehensive as the BBC’s. On top of that I’m *paying* for the BBC site out of my license fee.

If we’re going to get rid of things for being “too similar” to commercial offerings, can we also please scrap Eastenders as it’s just Coronation Street set in London? And Holby as it’s only a cheap version of E.R.? Getting rid of that dross would allow plenty of funding for excellent resources such as this.

How on earth you can scrap a site that gets almost 700,000 hits a month and comes second only to your news pages is beyond me. I thought the idea was to provide a public service? The two statistics there show that this site is doing this above and beyond all expectations, and your decision is one of utter stupidity.

Cult TV is going through a massive boom right now. I mean, come on – you’ve just sold Playschool in Maori! There are DVD releases coming out left/right/centre and this site is by far and away the most detailed and comprehensive *anywhere*. Killing it off is like scuppering the Ark Royal just because the US has a couple of aircraft carriers that can kind of do the same job.

If you do send me a reply, I’d appreciate a personal one – not the usual formulaic garbage such as the official statement which, frankly, contradicts everything I’ve ever believed the BBC to stand for.

Thank you for your e-mail regarding the closure of the Cult website.

I appreciate you have further concerns about the closure of the website. Rest assured that your complaint has been registered on the daily log. This will be made available throughout the BBC, including the senior management. Feedback of this nature helps us when making decisions about future BBC services and your comment will play a part in this process.

Thank you again for taking time to contact the BBC.

I think the basic gist of this is “your feedback will be ignored at the highest level”. **** them and **** their license fee. OK, OK, so the only decent stuff on TV these days is either on BBC or Channel 5, but I wonder if I could withhold 2p/month of my direct debit in protest?